Is there anyone who does not love homemade bread? If so, I have not met that person, have you?

As a young mother of two toddlers in the early 60s, I was gifted with a kind neighbor who taught me to make white bread, the only kind we ate back then. I loved my new skill for two reasons: my bread tasted so much better than Wonder Bread and, for as long as I was an at-home mom, I was proud to be able to make all our bread. Then life led me onto unexpected paths outside my home and I lost that precious time for several years.

In the late 70s, I remarried, a Catskill Mountain dairy farmer, a decision that brought two more toddlers and my unrelenting quest to learn how to make and preserve all our food from scratch. Microwaves had just hit the market but Cuisinart hadn’t invented bread machines yet, so the bread maker was—well—me. I thrived for more than a decade pursuing this lifestyle I loved until the farm economy nose-dived and I needed to return to work off the farm. Once again, I shelved my precious lifestyle mission.

Now, in retirement, I’ve embraced that wonderful quest again. I prefer, as much as possible, to be intimately acquainted with each ingredient I use and know where it came from. Recently I was kneading a batch of whole-grained bread for stuffing the Thanksgiving turkey and reflecting how many ways we can make delicious breads today. First, of course, are the bread-making machines on our kitchen counters. Mine is an unexpectedly acquired stainless rectangle that takes a lot of counter space bur does a decent job if I’m short on time.  Second is a recent quick way to make no-knead yeast dough: put all ingredients into a bowl, stir briskly until mixed, and refrigerate for up to two weeks. Whenever you want bread or pizza dough, you simply scoop out a ball of the dough and bake it.

Then there’s the old-fashioned way I learned five decades ago. As I kneaded the large stuffing dough ball, I decided this would always be my favorite method. I loved the feel of the gingerbread colored dough moving back and forth beneath my palms and of the many bits of cracked wheat that dimpled the ball. The sound of the dough sliding on the lightly floured breadboard beneath my hands also whispered promises of mouth-watering moments later on.

When just enough flour had been kneaded in, the dough lost all stickiness and felt cool, smooth, and pliable. Then I rolled it in my oiled bread bowl and covered it with a towel with these embroidered words, “Thank you for friends between us, food before us, Your presence among us.” As I began another task I smiled as I thought about the silent magical task that dough ball was about to begin to double its size in the dark beneath the towel.

My thoughts slid back to long-ago maple syrup seasons on the farm. On an unknown day in late winter, as the nights stayed cool, but the days began to warm, I’d step outside into a warm moistness in the air and know intuitively that sap had begun to run in the maple trees. The time had arrived to tap the trees and boil the sap into delectable maple syrup.  No one told me; the knowledge had, over the years, simply become stored in my bones.

Later, as my baking bread filled my small house with an aroma that no bread machine could duplicate, I understood that the act of making bread the old-fashioned way was for me as visceral as knowing when the sap had begun to flow. It was a silent, mysterious, and exquisite act of tapping into ancient wisdom. 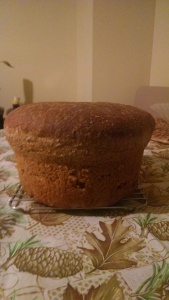 Mary Jo Doig was the first in her family to attend college and graduated from the State University at Oneonta in New York’s Catskill Mountains with a degree in Secondary English Education/Educational Psychology. There she fell in love with rural life, remained, and eventually transitioned from city girl to country woman when she married a dairy farmer and raised their three children on their small family farm. A life-long lover of reading and writing, Mary Jo has for nearly twenty years been a member of the Story Circle Network. There she has been an editor, a women’s writing circle facilitator, a book reviewer, and life-writing enthusiast, working extensively with women writing their life-stories while writing her own memoir. Presently, she is a three-time Program Chair for SCNs national Stories from the Heart conference and a board member. She also facilitates Older Women’s Legacy workshops and a women’s life-writing circle in her area communities. Her stories have appeared in Kitchen Table Stories anthology, Story Circle Annual Anthologies, and most recently her story “I Can’t Breathe” was published in the Anthology, Inside and Out: Women’s Truths, Women’s Stories. Her work also appears in varied blogs and periodicals, on her blog Musings from a Patchwork Quilt Life (https://maryjod.wordpress.com), Facebook, and Twitter. Her son and two daughters grown, Mary Jo presently treasures her country life in Virginia’s Central Shenandoah Valley. She loves cooking (and eating!) healthy food, reading, writing, quilting, hiking, and spending quality time with her rescue cats, Button and Xena, and beagle, Addie, who each dream of being only children. Her first book, Patchwork: A Memoir of Love and Loss, will be published in October, 2018 by She Writes Press.
View all posts by Mary Jo Doig →
This entry was posted in Family, Gratitude, Health, In the Kitchen, Simplicity. Bookmark the permalink.

Social Justice For All

Working towards global equity and equality

Walking with My Mother in the December of Her Life

Disconnected thoughts from a clouded memory of life's unstable moments.