Today I’m wondering how old a quilt has to be before it is considered an heirloom, so checked my college Webster New World dictionary, which says: 1. A piece of personal property that goes to an heir along with an estate; hence, 2. any valuable or interesting possession handed down from generation to generation. Okay, then, by the second definition, Gladys’ quilt is an heirloom.

When I married Don and moved to Bovina in 1973 and learned how to make friendship quilts from Marilyn Gallant, the first quilt I made was for my treasure-of-a-mother-in-law, Gladys Doig.

Early nineteenth century traditional friendship quilts were comprised of patchwork squares with a light-colored patch in the center for each participating woman to sign her name. Here are several examples found at a Quaker Quilt website.

By 1976, following Marilyn’s method, I gave large muslin squares (a 15” square—the largest I’ve ever used) to twenty friends and relatives who wanted to make squares for Gladys’ quilt. Each could complete the square in any way he/she wished: patchwork, embroidery design, needlepoint design, or fabric paint.

In time, the second most exciting part of the process occurred when the completed squares came back to me.

There was neighbor, Helen Burns’ lovely oak leaves (symbol of strength) and acorns (symbols for luck, prosperity, and growth):

Then the Henry and Doris Rabeler family block arrived, with their daughters’ and spouses names (right.) 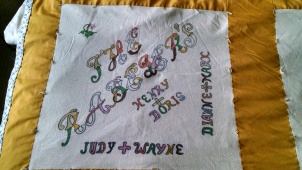 Gladys and Ed’s daughter, Bea, sent the below stunning square from Colorado. The words, if you can’t make them out, say: God couldn’t be everywhere, so He created mothers.

The four grandchildren–Chip, Beth, Shawn, and Lisa–divided a square, designed and completed it (below, right), perhaps with some help from a parent.

The most exciting quilt-making process was assembling and simply hand-tying it, followed by gifting it to Gladys and Ed for Christmas, 1976. It remained on their bed through the decades. Gladys died at 69, just three years after receiving the quilt, but Ed remained in their home until he entered a care facility many years later. By then Don and I were no longer together, Don was remarried, and after his father died, he and Pattie moved into Gladys and Ed’s house where the quilt passed on to them. When Don died a few years after his father, Pattie handed the quilt on to my daughters, Polly and Susan.

Now they are delighted to pass the quilt onto Beth—Gladys and Ed’s first grandchild–who is receiving it in the same spirit. Forty years later, the quilt remains in good condition. I smile as I envision it in Beth’s home and wonder, then, to whom will it pass next?

Thus begins the next chapter of Gladys’ Quilt’s story.

Mary Jo Doig was the first in her family to attend college and graduated from the State University at Oneonta in New York’s Catskill Mountains with a degree in Secondary English Education/Educational Psychology. There she fell in love with rural life, remained, and eventually transitioned from city girl to country woman when she married a dairy farmer and raised their three children on their small family farm. A life-long lover of reading and writing, Mary Jo has for nearly twenty years been a member of the Story Circle Network. There she has been an editor, a women’s writing circle facilitator, a book reviewer, and life-writing enthusiast, working extensively with women writing their life-stories while writing her own memoir. Presently, she is a three-time Program Chair for SCNs national Stories from the Heart conference and a board member. She also facilitates Older Women’s Legacy workshops and a women’s life-writing circle in her area communities. Her stories have appeared in Kitchen Table Stories anthology, Story Circle Annual Anthologies, and most recently her story “I Can’t Breathe” was published in the Anthology, Inside and Out: Women’s Truths, Women’s Stories. Her work also appears in varied blogs and periodicals, on her blog Musings from a Patchwork Quilt Life (https://maryjod.wordpress.com), Facebook, and Twitter. Her son and two daughters grown, Mary Jo presently treasures her country life in Virginia’s Central Shenandoah Valley. She loves cooking (and eating!) healthy food, reading, writing, quilting, hiking, and spending quality time with her rescue cats, Button and Xena, and beagle, Addie, who each dream of being only children. Her first book, Patchwork: A Memoir of Love and Loss, will be published in October, 2018 by She Writes Press.
View all posts by Mary Jo Doig →
This entry was posted in Bovina Stories, Community, Family, Friendship, Gifts, Mystery, Quilts, Simplicity. Bookmark the permalink.