More than four decades ago, my second-grade son, Keith, brought home a God’s Eye he’d crafted in school shortly before Christmas. At the time I’d never heard of a God’s Eye and asked him to tell me about it. 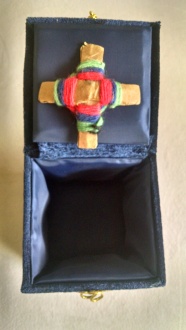 “My teacher said it can be a Christmas tree decoration. Or we can use it any way we want to.”

“It is certainly pretty,” I observed as I looked more closely at the colorful, interesting creation that started with two narrow strips of cardboard fastened into a cross configuration. Keith had then wrapped bright colors of yarn—red, then blue, and green—around each of the four arms of the cross. Later I would learn that red symbolized life, blue represented sky and water, and green on the outer edge was for vegetation.

“We don’t have our tree yet,” I said to Keith. “Suppose we hang it in the window until we do get the tree?”

We set God’s Eye on the table and didn’t get it hung that afternoon. A family crisis arrived the next day , about which I prayed almost non-stop. There was something about the name of Keith’s craft, God’s Eye, that caused me to keep it near.

The events that ensued during the next four months were life-changing and during that time God’s Eye was placed in the box you see it resting on above.

Several years later, I re-discovered the God’s Eye and placed it on my desk in my cabin in the woods. I’d started writing my memoir then and became curious about the story behind the God’s Eye. I found through research that a God’s Eye was an ancient symbol that originated in Jalisco, Mexico with the Huichol Indian tribe. When his child was born, a Huichol father wove the central eye in the God’s Eye, or Ojo de Dios. Each following year until age five, the father wove another round of yarn, another “eye.”

On a deeper level, this Christian symbol represented a spiritual covenant with God, to watch over and grant the child good health, good fortune, longevity, and auspiciousness. The four ends of the cross symbolized the four life elements: earth, air, fire, and water. Whether a God’s Eye was hung on a wall, the end of an arrow, or in the child’s hair, the Huichol believed it had the power to heal, protect, and ensure the child a long and healthy life.

I’ve created a quilt square that replicates Keith’s God’s Eye for my story quilt;  God’s Eye is also the title of Chapter 20 in my memoir.

Mary Jo Doig was the first in her family to attend college and graduated from the State University at Oneonta in New York’s Catskill Mountains with a degree in Secondary English Education/Educational Psychology. There she fell in love with rural life, remained, and eventually transitioned from city girl to country woman when she married a dairy farmer and raised their three children on their small family farm. A life-long lover of reading and writing, Mary Jo has for nearly twenty years been a member of the Story Circle Network. There she has been an editor, a women’s writing circle facilitator, a book reviewer, and life-writing enthusiast, working extensively with women writing their life-stories while writing her own memoir. Presently, she is a three-time Program Chair for SCNs national Stories from the Heart conference and a board member. She also facilitates Older Women’s Legacy workshops and a women’s life-writing circle in her area communities. Her stories have appeared in Kitchen Table Stories anthology, Story Circle Annual Anthologies, and most recently her story “I Can’t Breathe” was published in the Anthology, Inside and Out: Women’s Truths, Women’s Stories. Her work also appears in varied blogs and periodicals, on her blog Musings from a Patchwork Quilt Life (https://maryjod.wordpress.com), Facebook, and Twitter. Her son and two daughters grown, Mary Jo presently treasures her country life in Virginia’s Central Shenandoah Valley. She loves cooking (and eating!) healthy food, reading, writing, quilting, hiking, and spending quality time with her rescue cats, Button and Xena, and beagle, Addie, who each dream of being only children. Her first book, Patchwork: A Memoir of Love and Loss, will be published in October, 2018 by She Writes Press.
View all posts by Mary Jo Doig →
This entry was posted in Childhood, Family, Gifts, Mystery. Bookmark the permalink.